U.S. citizens who will be getting married to a foreign national in the United States may petition for a fiancé(e) classification (K-1) for their fiancé(e). You and your fiancé(e) must be free to marry. This means that both of you are unmarried, or that any previous marriages have ended through divorce, annulment or death. You must also have met with your fiancé(e) in person within the last two years prior beginning the K-1 Visa petition process (filing the I-129F). This requirement can be waived only if meeting the non US Citizen's fiancé(e) in person would violate long-established customs, or if it would create extreme hardship on the US Citizen.

An American begins the process of petitioning a foreign fiancé(e) by filing a form I-129F with US Citizenship and Immigration Services. Official instructions are available from the US Citizenship and Immigration Services web site, or the Department of State web site. No attorney or other intermediary is necessary to petition someone for a K1 visa, however some choose to hire an attorney to handle the paperwork and facilitate the process.

Once a visa petition has been filed, the USCIS service center sends it to the National Visa Center, which in turn forwards it to the Embassy or Consulate nearest the foreign fiancé(e). The Embassy or Consulate will notify the foreign fiancé(e) that a petition has been received, and provide information about how to schedule a medical exam with the panel physician as well as how to schedule an appointment for a visa interview at the Embassy.

Once the interview is finished the Consular officer can issue the visa, if he is convinced of a bona fide relationship that meets all legal requirements. The officer may also request that further evidence be submitted before making a decision. If the Consular officer does not think the relationship is bona fide or finds some legal impediment to issuing the visa, the petition will be returned to USCIS and recommended for revocation and no visa will be issued.

A K1 visa is printed on a self adhesive label, similar to a tourist visa, but annotated with the name of the petitioner. The label is placed into the fiancé(e)'s passport. It is valid for one entry into the United States for six months from the date of issuance.

The total time from filing of the initial petition to the actual issuance of a visa can vary. You can check the current processing times in the Timeline section. The length of time depends partly on the processing speed of the USCIS center that receives the visa peition, as well as availability of appointments at the Embassy or Consulate nearest to the foreign fiancé(e). Visa petitioners and their fiancé(e) can avoid unnecessary delays by making sure their applications are completely and accurately filled out, and by scheduling necessary appointments with the panel physician and US Embassy as soon as they are eligible to do so.

Note: The US Citizen may also apply to bring the K-1 Visa holder's unmarried children, who are under age 21, to the United States.

Note: A K-1 Visa holder may enter the United States only one time with their visa. If the K-1 Visa holder leaves the country before they are married, they may not be allowed back into the United States without a new visa. Also, do not leave the U.S.A. while the adjustment of status is pending, as doing so is considered abandoning the petition for adjustment of status, requiring that you start over; unless you get a special stamp in your passport to say otherwise.

VisaJourney tracks historical processing times for K1 Visas, from the initial I-129F Petition NOA filed by the US petitioner to the Final K1 Visa being issued to the fiance at their US Consulate.

The following plot shows the overall processing time for K1 visas from the initial I-129F petition. To track your immigration case and receive free estimated approval dates, you can add your timeline information to the VJ timeline system. 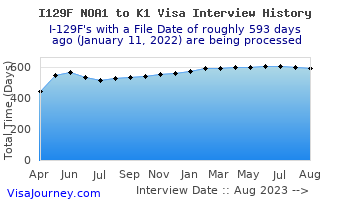 A K1 Visa, also known as a fiance visa, allows the fiance of a US Citizen to enter the United States with the requirement that they get married within 90 days and file for US Permanent Residency.

How long does it take to get a K1 Fiance Visa?

It generally takes between 8 and 11 months to get a K1 Fiance Visa, depending on what country the non-citizen fiance lives in.

How long is a K1 Visa good for?

A K1 Fiance Visa Holder must enter the United States within 6 months of the visa being issued.

Can I visit the US while my K1 Visa is pending?

Yes, you can visit the US prior to your K1 visa being issued however it is at the sole discretion of the immigration officer. If they suspect you intend to stay in the US and get married then they may deny your entry into the US and send you back home.

How long does a K1 visa holder have to get married?

A K1 Fiance Visa Holder has 90 days to get married in the US after they arrive, after which time they can file for Permanent Residency.

Can a K1 visa holder work in the US?

A K1 Fiance Visa Holder can not work in the US unless they have filed for Permanent Residency and have been issued a work permit.

Pearl Wilson, Lawyer's Assistant
Welcome! How can I help with your immigration question?
Pearl Wilson is typing...
Connect with a lawyer