IR1/CR1 Visas are immigrant visas issued to foreign spouses of U.S. Citizens. If you follow this process, the foreign spouse will complete the visa process completely outside the US, and then arrive in the US and become a Permanent Resident immediately. Once the immigrant visa holder enters through a US Port of Entry, he or she will receive a Green Card in the mail (at their US address) within a few weeks. Additionally, sometimes the immigrant visa holder will have their passport stamped at the Port of Entry with an I-551 stamp (indicated their Legal Permanent Residency Status).

For statistics on the numbers of immigrant visas issued by the U.S., broken down by country, see: The U.S. Department of State Visa Statistics page. For 2007, Table VIII -- Immediate Relative Immigrant Visas Issued (by Area of Birth): Fiscal Year 2007 -- breaks down IR-1s and CR-1s by country.

Differences Between IR1 and CR1 Visas

To obtain either visa, you must meet the following requirements:

The first step to bring your spouse to the U.S is to file the I-130 (Immigrant Visa Petition) with the USCIS. This form will be processed for approval and sent to the National Visa Center for further processing. Then petition will be forwarded to the embassy nearest the beneficiary. That embassy will collect the necessary information and conduct a visa interview where an IR1 or CR1 visa may be issued.

VisaJourney tracks historical processing times for CR1 & IR1 Visas, from the initial I-130 Petition NOA filed by the US petitioner to the Final CR1 or IR1 Visa being issued to the fiance at their US Consulate.

The following plot shows the overall processing time for CR1 & IR1 visas from the initial I-130 petition. To track your immigration case and receive free estimated approval dates, you can add your timeline information to the VJ timeline system. 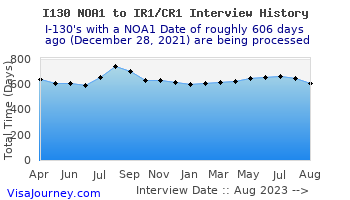 An IR1 Visa, also known as a Spouse visa, allows the spouse of a US Citizen to immigrate the United States and upon entry become a US Permanent Resident.

How long does it take to get an IR1 Spouse Visa?

It generally takes between 12 and 15 months to get an IR1 Spouse Visa, depending on what country the non-citizen spouse lives in.

How long is an IR1 Visa good for?

An IR1 Spouse Visa Holder must enter the United States within 6 months of the visa being issued.

What's the difference between an IR1 Visa and CR1 Visa?

Can an IR1 visa holder work in the US?

Yes, they can work immediately upon entry as they will become a Permanent Resident once they arrive in the US.

Pearl Wilson, Lawyer's Assistant
Welcome! How can I help with your immigration question?
Pearl Wilson is typing...
Connect with a lawyer